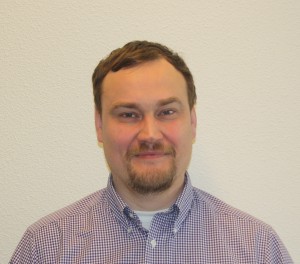 Where do you currently work, and what position do you work in?

I work in different fields at the same time. I’m a part time lecturer in hydrography, where I teach data management as well as GIS amongst others, which was actually one of my weak points before I started GIMA.

I’m also a part time consultant, and at the moment I do a lot of work at the ministry of internal affairs (ministerie van BZK), specifically about the Omgevingswet. Finally I’m also the technical editor for GIM International and Hydro International.

Is this your first position after graduation?

I started GIMA after already having been working for many years in information management roles that were closely related to either geography or hydrography. So the first job I landed after GIMA was my 4th position already, and I have been working different jobs ever since.

Of the skills that you acquired during GIMA, which ones are most important for your professional life now?

I would say that those are the more technical skills, specifically the core skills and their applications. I learned a lot about basic GIS, especially general GIS (I had only been working with specific GIS before) and its applications. So I liked for example modules 2 and 5, because you were actually using the knowledge you acquired earlier to build something useful. And another thing I’ve learned were the academic skills, because I come from an HBO background. It was good education, but the focus was of course more on the practical side, and so my research skills were limited. This was also one of my reasons behind joining GIMA.

The four universities. The fact that you get a different perspective from each university, and that each professor has a different outlook on the GI world. I didn’t like all universities’ perspectives equally, but it is the concentration on those differences that make you wonder and think. My perspective on GI prior to GIMA was limited to the natural and physical world, so getting the outlook from Utrecht University, which is a lot about spatial planning, was interesting, even though it was not my favorite perspective.

And the blended learning, which made it ideal for me to combine it with my work. I would have never had the time to take on a full time master’s programme. Also, I learned a lot from the other students, both from the ones who had already been working as well as from those who started GIMA right after their bachelor’s.

Do you have any additional advice for current GIMA students?

I would say keep track of your personal skills! Make sure you are able to connect them to a real world problem. Something you see from some students, especially those with little prior working experience, is that they study to get their grades. And there is nothing wrong with that, but if I could give them any advice, and that is also advice that I give my own students, is that in the end, somebody is expecting you to know what you’ve learned, and to be there and do your work in the organization. Specifically, I would advise GIMA students to try to make their study projects relevant for some stakeholder. Think about who your project would be relevant to in the real world.